This is Wellington’s earliest cemetery, opened in 1840 and closed fifty years later in the 1890s. In 1978 the name “Bolton Street Memorial Park” was adopted to emphasise the area’s heritage and landscape qualities, but in 2014 the Wellington City Council returned to the original name “Bolton Street Cemetery”.

The selection of public land for a ‘town cemetery’ for all people regardless of religious affiliation mirrored the new society the Wakefield Company sought to create in the colony. This contrasted with the traditional overcrowded churchyard cemeteries of England.

Burials began formally after Governor Hobson’s approval of the area as a non-sectarian burial reserve in August 1841. Deaths recorded in those early days of Wellington were often a reflection of the difficulties of life in the new settlement. Drowning, consumption and childbirth were commonly given as causes of death. Soldiers, large settler families, sailors, and especially children predominated, to be joined later by politicians and Maori and Pakeha community leaders.

At first the struggling citizens of Wellington could only afford wooden headboards and picket fences for protection from cows grazing on land overgrown with weeds. Whereas deaths were recorded, the locations of individual grave plots were not listed until the 1850s. These wooden headboards have long since decayed so that many plots cannot now be located.

In 1851 following some controversy, the ‘town cemetery’ was split into three sectarian areas known as Bolton Street Cemetery (for Church of England burials), Sydney Street Cemetery (the public one for “non-conformists”) and the Jewish Cemetery. Roman Catholic burials took place in the Mount Street Cemetery located adjacent to the University.

As the town grew and its leading citizens began to be buried, the headstones became more elaborate and permanent. The popular 19th Century plant, the rose, began to be planted amongst the graves. Exotic trees were also planted, both conifers from California and deciduous trees such as oaks and elms from Europe . Holly and yew were among other trees planted because they were felt to be appropriate for graveyards.

Growth of the town during the 1880s resulted in the three town cemeteries being surrounded by development to the concern of its citizens:

“It is not a pleasant thing to witness funerals from your window day by day, much less to hear when at meals, ‘I am the resurrection, etc.’ “, noted a letter to the editor of the New Zealand Times (20 June 1881).

With imminent overcrowding and concerns about health risks, the distant Karori Cemetery was established and the three town cemeteries closed in 1892, except for close kin within existing family plots.

Of the three buildings once in the cemetery area, only one remains. The Church of England Sexton ‘s Cottage located in lower Bolton Street was built of timber in 1857 and extended in 1885. A recent conservation plan has guided its restoration and maintenance. It is one of the two oldest houses still extant in Wellington and has historic status protection. It is currently not open to the public.

The Mortuary Chapel within the Church of England Cemetery was built of timber in 1866. After closure of the town cemeteries it was little used and fell into cycles of disrepair and restoration. Prior to its demolition in 1969, ‘measured drawings’ were taken for its planned restoration but finally a replica was built because of the poor condition of stored remnants from the original building. It is now a visitor centre, open daily, and contains displays, a memorial plaque and a full burial list with plot locations.

The Public Cemetery Sexton’s Cottage was built of timber in 1857 and demolished in 1908. It was occupied by Sexton, David Robertson, and his family for 30 years of his life, and then remained the home for his widow for the following twenty years of her life. Its brick outline can be seen on the upper lawn. 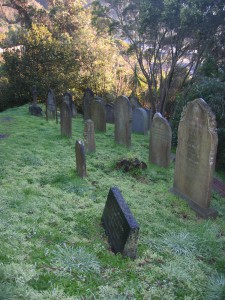 Several numbered ‘reserve areas’ in the vicinity of current day Anderson Park had been set aside for expansion of the town cemeteries if needed. A small number of burials were located there in the late 1880s before the overall closure in 1892. In 1906 prior to the formation of Anderson Park , the remains of 56 burials were disinterred from the so-called ‘Reserve V’ area (near Tinakori Rd ) to unmarked plots adjacent to Kinross Street . A plaque unveiled in 2001 now commemorates those reinterred after research of their records and current location by the Friends of BSMP.

The steep Glenbervie Road boundary was the source of occasional slips, further exacerbated by its widening to form Bowen Street in the late 1930s. A large slip in 1945 and further slips between 1953 and 1957 necessitated the reinterment of the remains from seventeen affected graves to the Memorial Lawn area.

Huge controversy prevailed in the 1960s over the proposed selection of the cemeteries area for the route of Wellington’s motorway. The cemetery was temporarily closed to all public access from 1968 until 1971 while about 3,700 burials, many newly discovered, were exhumed. Most of these remains now lie in a large vault beneath the Early Settlers Memorial Lawn situated behind the replica Chapel, while a small number were reinterred at Karori or Makara Cemeteries at the request of relatives. All recovered grave stones and monuments were relocated throughout other parts of the Cemetery, except for a few claimed by relatives. This section of the motorway was opened on 21 May 1978. A promise to build a linking piazza never eventuated and a more modest footbridge over the motorway was constructed instead. The overall damage to the cemetery was considerable and marked a turning point on Wellington ‘s attitude to conservation questions.

The figures for the land area summarise the history of the Cemetery. The original designation in 1841 comprised 18 acres, subdivided during 1850s into just over 7 acres for the Church of England and 2 roods, 37 perches for the small Jewish section, leaving just over 8 acres for the public cemetery. After land losses to the Bowen St cutting and Anderson Park, a total of only 8.2 acres (3.3ha) was still designated cemetery land. The Motorway took another 3.7 acres (1.5ha) leaving finally, after further small additions including a recent gift of land from Morva Williams, about 1.85 ha for the present park.

A detailed and authoritative history of the Cemetery has been written by Margaret H. Alington. This is “Unquiet Earth” published in 1978. She is also the author of several articles about the Cemetery and the Friends. The Turnbull Library holds useful material including these articles, the Friends’ newsletters, photographs and gravestone transcripts.